Get Up Outta Ya Skin 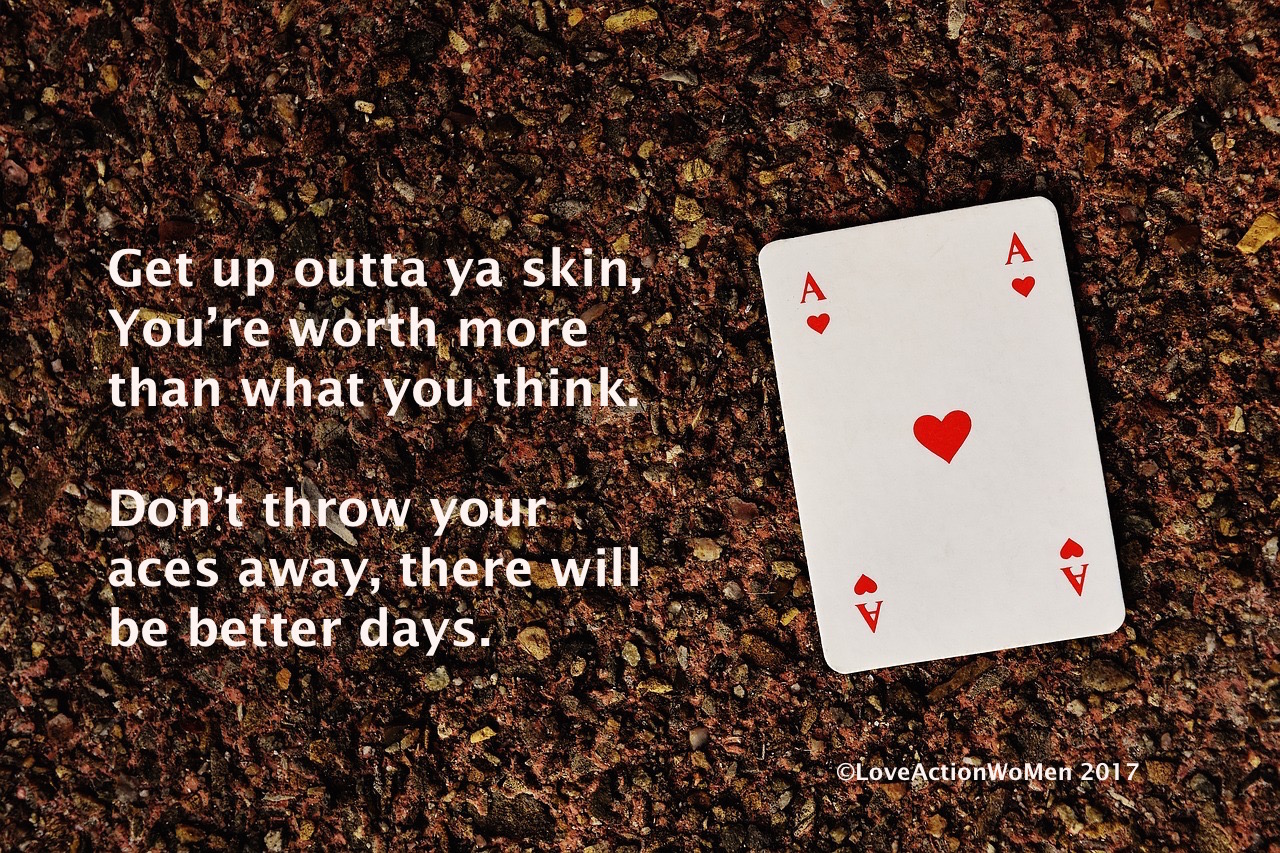 As part of Mental Health Awareness Week, I dedicate this blog to the Heads Together campaign, the lead charity at this year’s London Marathon, supported by Prince Harry and the Duke and Duchess of Cambridge. The campaign aims to change the way we have conversations about mental health. Just prior to the marathon, which I volunteered at, saw Prince Harry talk candidly about how he shut down about his own mental health issues, in an interview on MAD World, namely anger and anxiety, ever since his mother died.

It has inspired me to step out of my skin and open up further about my own past mental health, although I see it as a part of the bigger picture. That being my Spiritual Emergency, 8 years ago, a turbulent conscious awakening, which was triggered by the loss of my father, relationship and all my freelance contracts in marketing and PR, within 100 days. Apologies in advance if you’ve read some of this before.

I call it my inner revolution, which birthed my three screenplays, loosely inspired by my clamber up from rock bottom to believing in myself. The task was delivered from the ether, a tad like an epiphany, as I wrote it in The BIG Dream of Self Belief article. I was too afraid of stating, the voices told me to do it.

I’d never ever heard voices and then a heap of them, sometimes non-stop, causing sleepless nights. Men, women, old, young, children, British, foreign, on the whole, encouraging me that it is my destiny and I will complete them when I believe in myself. Sometimes they were frightening, intrusive. My own dark voice even, telling me you can’t, you’re crazy, a failure, no-one is going to believe your far out story. The part I call my ogre-self and fear.

Through the novelty of hearing voices, I was delivered my so-called destiny. Imagine that?

Whether you consider it spirits or my subconscious, it doesn’t really matter. The point is that the uplifting voices were a source of formidable strength, sometimes making me laugh, in an effort to keep me grinding at the task and life. The wiser ones I call the Unknown Force, even Yoda, to keep a light spin on it.

Add to that, I soaked up the moods, emotions and characteristics, good and bad, of any spirit I crossed paths with, even people, so thin my boundaries had become. I sit on the spectrum of being mediumistic and a highly sensitive person (HSP), although I’m not keen on labels.

To top it off, vivid movies played inside of my mind’s eye. The worst were of murder, rape, abuse – me the victim, and yet I had never been abused in my life. I learned they were past lives, as per Buddhism, Hinduism, Sikhism, Shaman philosophies and more.

Through that debilitating period, I was pushed by the voices to keep writing about my experiences, when I’d rather the world have just swallowed me up. Reams and reams of virtual pages, rewrites after rewrites, some I’d be afraid to look at now, in order to find my stories. I wanted to give up on so many occasions, but the voices wouldn’t let me.

My so-called destiny was driving me insane, and I felt insane for listening to them.

The lyrics you see by the Ace of Hearts image are part of a song I wrote over four years ago, when the will to believe in myself began to overtake my defeatist ogre self. I saw tiny creative victories, like this song, having immersed myself in the arts, even learning to read music and play piano. Life was happening again and my stories began to take shape.

Today, I believe I cAN grow the little c, into an all resounding I CAN. I’m in a place of happiness with my progress, despite not having completed the screenplays, although detailed outlines have been crafted with room to fine-tune the finales, which I’ve made it a point to be inspired by real life. It’s the true stories that reach us most, right?

Last year, I completed the Raindance Filmmaker’s course and got together with a few budding filmmakers to produce my first short film. Our third one is about to go into pre-production.

I even began a 30 day challenge to write the first draft of my Indian screenplay this month. Never did I think I’d see the day, although I’m still waiting to meet MR WHO? My true luurve, who I’ve punctuated as the finale for this one. There’s still so much to learn, but I’m committed to it, destiny or no destiny.

As for my mental health, I’m a trooper. Holistic methods, healthy diet and mediation helped me balance out my host of conditions, and they continue to do so today. l will write up another article, at some point, going into my day to day lifestyle. I’m just not a pill popper me, although I don’t recommend this to everyone.

I still hear voices, have visions, am highly sensitive and experience the odd depression on a down day, but it’s my power, the centre from which my creativity flows, and I’d be at an utter loss without them.

A quick round up since my March News. I wanted to break my non-first dates with the lemmings who disappeared off the cliff before we had even met. While I did have two different dates this month, it was the friend’s vibe that flourished. Cupid was not in the room. No love lost for me, it only grows further. For another time and place…